The Full Cycle Phenology Project brings together a group of diverse and uniquely qualified collaborators from Boise State University, the American Kestrel Partnership, HawkWatch International, St. Mary’s University, Environmental Laboratory of the U.S. Army Engineer Research and Development Center, and the University of California, Los Angeles. This project will combine cutting edge genetic techniques and a large-scale collaboration of professional and citizen scientists across the western hemisphere to find out more about migratory connectivity, population change, and the impacts of climate change on the American Kestrel and other migratory birds.

Upon understanding a species' genoscape, we can then screen individuals to figure out which population they are from. This is the basis of UCLA's Bird Genoscape Project, which is looking at genetic samples of several migratory bird species to understand where populations breed, migrate, and over-winter for each species. In the map below you see the genoscape and migration map for populations of the Wilson's Warbler from a study led by Kristen Ruegg at UCLA; this was the first map produced using this method and revolutionized how we will understand the migration patterns of avian species. We are using this technique for the American Kestrel Genoscape Project. 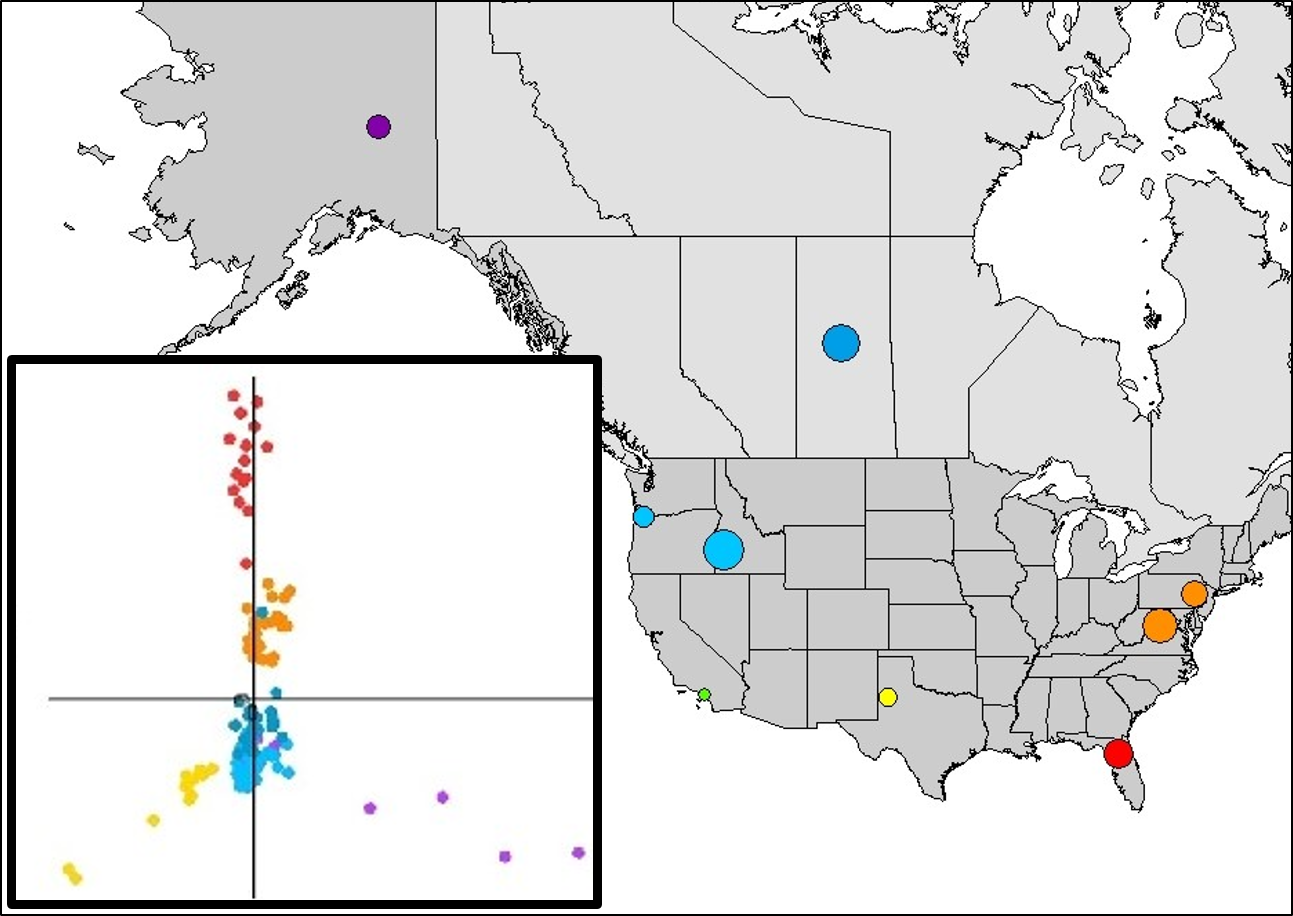 Thanks to AKP partners like you, we are well on our way to creating a map of American Kestrel breeding populations. Created from analysis of blood samples sent to us during the past two years, this map shows genetically distinct groups of American Kestrels that represent potentially unique breeding populations. Each color on the map represents a genetically distinct group and the size of the circle represents how many samples we have from that general location. For example, you can see that the Texas circle is a different color (yellow) than all others, indicating that kestrels in Texas are genetically differentiated from those of other locations. The boxed figure shows the genetic similarities between all of the 191 blood samples; the color of the dot represents where the sample was collected and corresponds to the colors on the map. The further the dots are from each other in the box, the less the the samples have in common genetically. Again, you see that the Texas samples (yellow) are grouped pretty far away from other samples, for example. We could say the same for the Alaska samples, in purple. This is just the tip of the iceberg though and there is a lot more for us to learn. Therefore, we need many more samples to determine if kestrels in these areas represent true genetically distinct breeding populations!

We have started building a genoscape map for breeding American Kestrels using blood collected from birds on their breeding grounds thanks to AKP partners like you! In the map below, you can see our preliminary findings.

Where we need samples 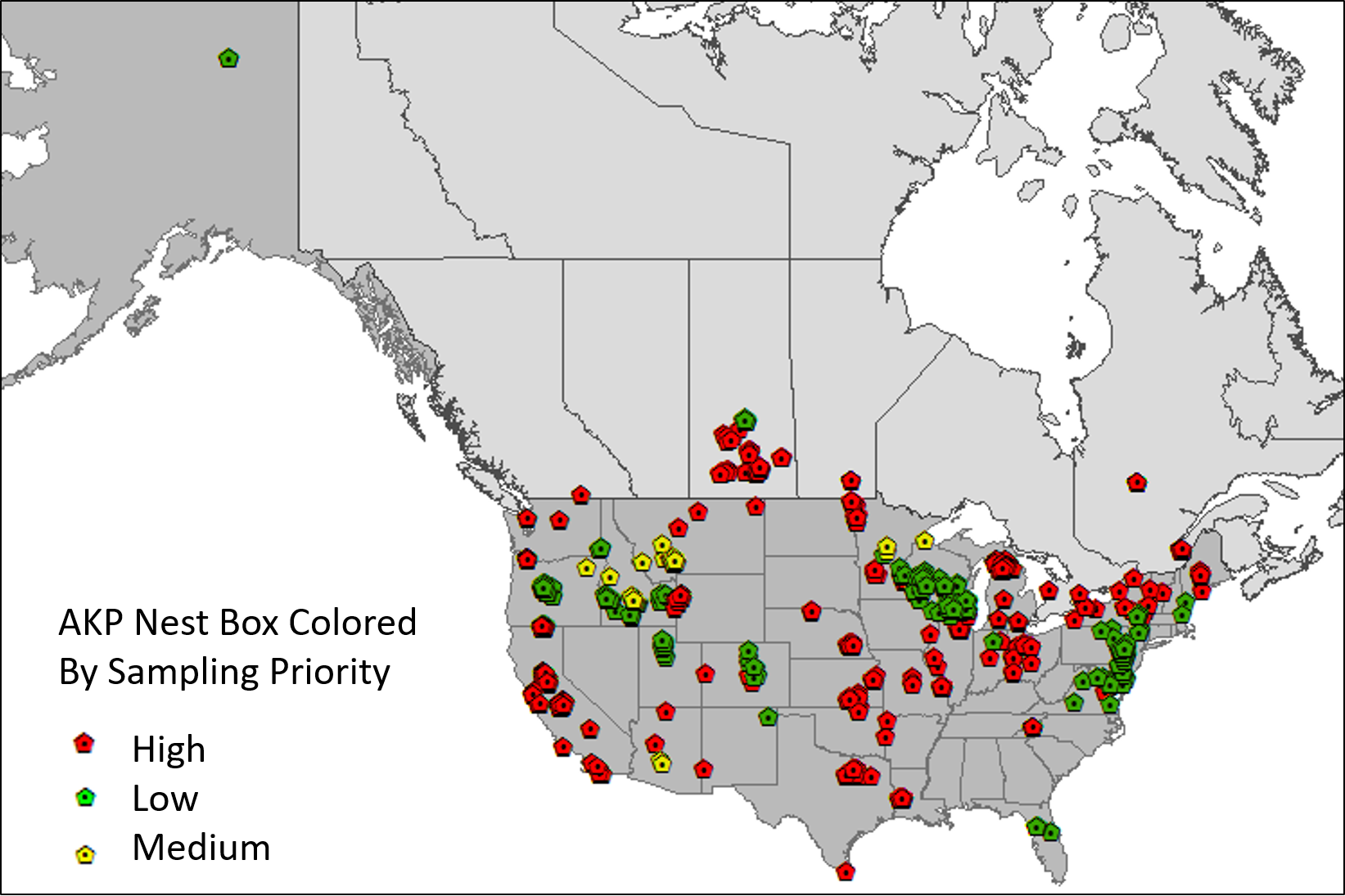 I want to collect and send samples, what should I do?

We will be happy to accept as few as one sample and up to about 25 samples from any given monitoring area. Feathers can be plucked with with your bare hand (don't need gloves) and stored in a coin envelope that we will send you. Samples should be kept at room temperature or in the refrigerator and shipped together to us at the end of the season. We will send you a pre-paid fed-ex label for free shipping.We need you to collect certain information, including nestling age and sampling date, and include this information on the sample envelope AND in a spreadsheet. You will need proper state and federal permits to collect feather samples.

Thanks for your partnership in kestrel conservation,
American Kestrel Genoscape Team