How do your efforts make kestrel research and conservation possible at continental scales?

Here is one example illustrating how your nestbox data, whether from one box or 100, can help researchers understand how land management can benefit nesting kestrels. This map of south Boise, Idaho, has blue icons representing kestrel nestboxes around The Peregrine Fund’s property, which is largely grassland and sagebrush, and orange icons representing nestboxes in areas with mostly suburban and agricultural development. 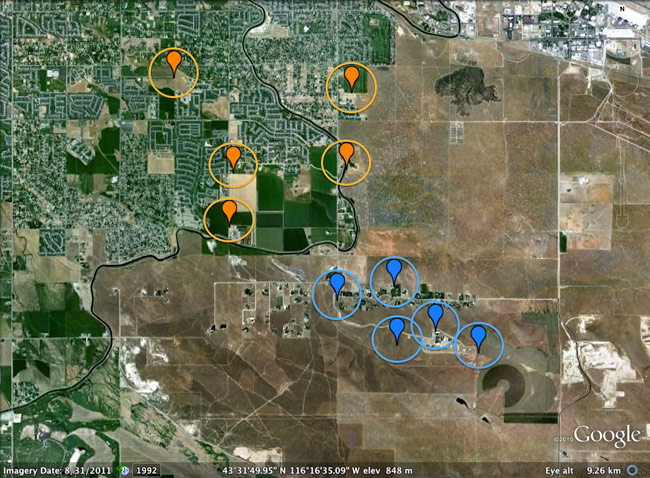 These are just a few hypothetical questions, of many, and we don’t know the answers — with your help, we can develop a better understanding of kestrel ecology and enjoy the striking color and fiesty personality of North America’s smallest falcon for many generations to come.

The American Kestrel Partnership is developing and coordinating a network of locally managed nestbox monitoring programs across North and South America to generate kestrel nesting data at unprecedented spatial scales, including data on phenology (seasonal timing of nest initiation), occupancy (% of nestboxes occupied by kestrels), productivity (number of nestlings in the nest), and survival (number of nestlings fledged from the nest). These important measures of nesting performance are then related to environmental factors, such as land use/landscape composition, climate variation, soil condition, and environmental contaminants. Understanding these relationships will paint a more complete picture of the American Kestrel’s life history and provide information to support conservation of kestrel habitat and populations.

The Full Cycle Phenology Project brings together a group of diverse and uniquely qualified collaborators from Boise State University, the American Kestrel Partnership, HawkWatch International, St. Mary’s University, Environmental Laboratory of the U.S. Army Engineer Research and Development Center, and the University of California, Los Angeles. This project will combine cutting edge genetic techniques and a large-scale collaboration of professional and community scientists across the western hemisphere to find out more about migratory connectivity, population change, and the impacts of climate change on the American Kestrel and other migratory birds.

Upon understanding a species' genoscape, we can then screen individuals to figure out which population they are from. This is the basis of UCLA's Bird Genoscape Project, which is looking at genetic samples of dozens of migratory bird species to understand where populations breed, migrate, and over-winter for each species. In the map below you see the genoscape and migration map for populations of the Wilson's Warbler from a study led by Kristen Ruegg at UCLA; this was the first map produced using this method and revolutionized how we will understand the migration patterns of avian species. We are using this technique for the American Kestrel Genoscape Project. 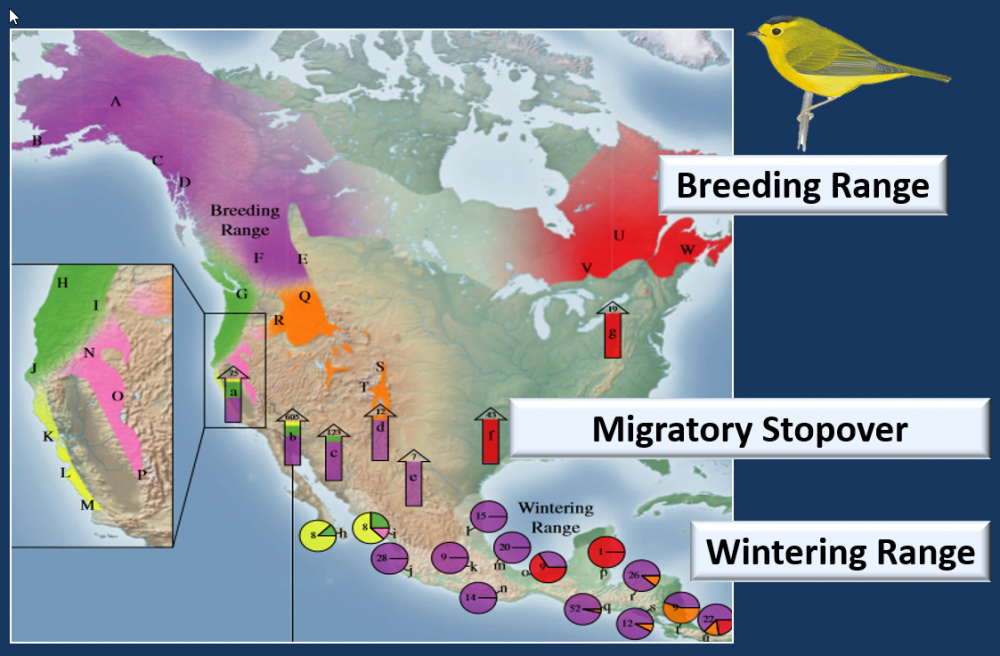 Led by Kristen Ruegg at UCLA, this study of Wilson’s Warbler (pictured) provides an excellent example of how we can study the migratory patterns of American Kestrel populations. Individuals were sampled on breeding grounds and six populations were identified (represented by different colors of amorphous color shading). Then, individuals were sampled at multiple migratory stopover locations (shown by the arrows) and at several location across the species' wintering grounds (shown by pie charts). These samples were screened to determine which breeding population they originated from, represented by the colors inside each arrow and pie chart. This method allows us to know where it is that breeding populations go for the winter and the route they follow when returning to their breeding grounds. For example, we see that the yellow population, winters on either side of the Gulf of California, migrates through the two westernmost stopover sites, and breeds on a portion of the California coast (figure modified from Ruegg et al. 2014).

Where We Need Samples 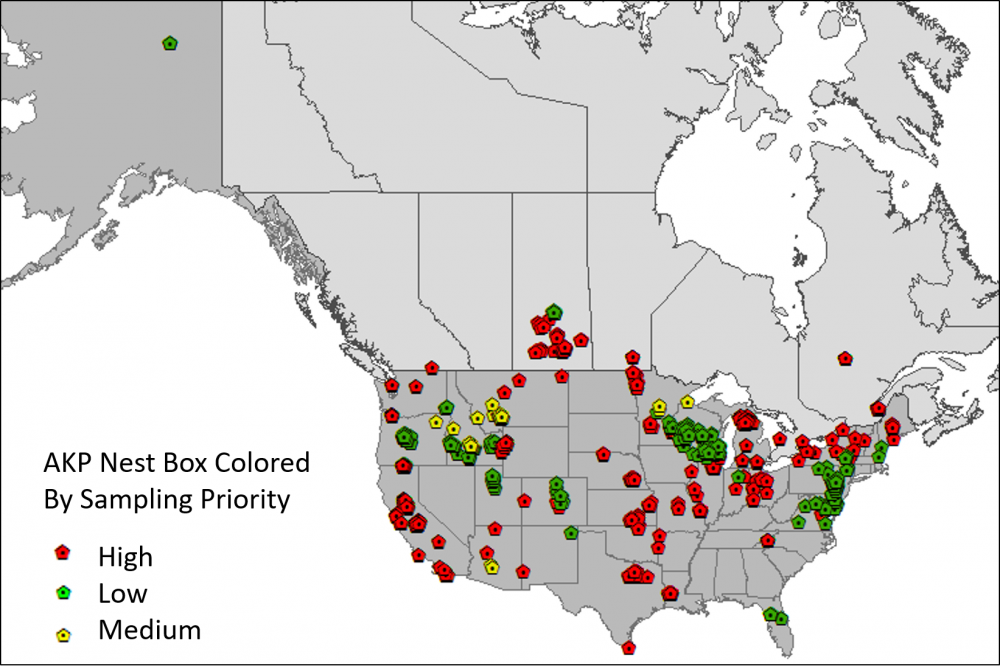 I want to collect and send samples. What should I do?

We will be happy to accept as few as one sample and up to about 25 samples from any given monitoring area. Feathers can be plucked with with your bare hand (don't need gloves) and stored in a coin envelope that we will send you. Samples should be kept at room temperature or in the refrigerator and shipped together to us at the end of the season. We will send you a pre-paid fed-ex label for free shipping. We need you to collect certain information, including nestling age and sampling date, and include this information on the sample envelope AND in a spreadsheet. You will need proper state and federal permits to collect feather samples.